From their crystallisation in the late fifth century to their ultimate decline in the eighth, the Merovingian kingdoms were a product of a vibrant Mediterranean society with both a cultural past and a dynamic and ongoing dialogue between the member communities. By bringing together the scholarship of historians, archaeologists, art historians, and manuscript researchers, this volume examines the Merovingian world’s Mediterranean connections. The Franks’ cultural horizons spanned not only the Latin-speaking world, but also the Byzantine Empire, northern Europe, Sassanid Persia, and, after the seventh century, a quickly ascendant Islamic culture. Traces of a constant movement of people and cultural artefacts through this world are ubiquitous. As simultaneous consumers, adapters, and disseminators of culture, the degree to which the Merovingian kingdoms were thought to engage with their neighbours is re-evaluated as this volume analyses written accounts, archaeological findings and artefacts to provide new perspectives on Merovingian wide-ranging relations. 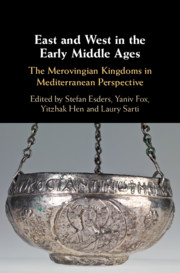 1. Archaeological perspectives on communication and exchange between the Merovingians and the Eastern Mediterranean – Jörg Drauschke
2. Anxiously looking east: Burgundian foreign policy on the eve of the Reconquest – Yaniv Fox
3. Pax inter utramque gentem: the Merovingians, Byzantium and the history of Frankish identity – Helmut Reimitz

4. Cultural transmission caught in the act: Gregory of Tours and the relics of St Sergius – Phillip Wynn
5. Hermenegild’s rebellion and conversion – Merovingian and Byzantine connections – Wolfram Drews
6. Early Byzantine church silver offered for the eternal rest of Framarich and Karilos: evidence of ‘the army of heroic men’ raised by Tiberius II Constantine? – Benjamin Fourlas
7. Money for nothing? Franks, Byzantines and Lombards in the sixth and seventh century – Andreas Fischer

Part III. The Pope as a Mediterranean Player:

8. The Papacy and the Frankish Bishops in the sixth century – Sebastian Scholz
9. A one-way ticket to Francia: Constantinople, Rome and northern Gaul in the mid-seventh century – Charles Mériaux
10. The digression on Pope Martin I in the Life of Eligius of Noyon. A testimony to late seventh-century knowledge exchange between East and West? – Laury Sarti
11. Perceptions of Rome and the papacy in late Merovingian Francia: the Cononian recension of the Liber pontificalis – Rosamond McKitterick

12. Relocation to the West: the relic of the True Cross in Poitiers – Galit Noga-Banai
13. A generic Mediterranean: hagiography in the early Middle Ages – Jamie Kreiner
14. Defensor of Ligugé’s Liber scintillarum and the migration of knowledge – Yitzhak Hen
15. Willibald in the holy places – Ora Limor

16. ‘Great security prevailed in both East and West’: the Merovingian kingdoms and the 6th Ecumenical Council (680/81) – Stefan Esders
17. In the circle of the bishop of Bourges: Bern 611 and late Merovingian culture – David Ganz
18. Contact with the Eastern Mediterranean in the late Merovingian period – Ian Wood
19. ‘Merovingian’ illuminated manuscripts and their links with the eastern Mediterranean world – Laurence Nees
20. ‘Sons of Ishmael, turn back!’ – Ann Chrystis
21. Carolingian kingship, apostolic authority and imperial recognition of Pippin the Short’s ‘Italienpolitik’ and the quest for royal legitimacy – Erik Goosmann