Anglo-Saxon farming made England so wealthy by the eleventh century that it attracted two full-scale invasions. In Anglo-Saxon Farms and Farming, Debby Banham and Rosamond Faith explore how Anglo-Saxon farmers produced the food and other crops and animal products that sustained England’s economy, society, and culture before the Norman Conquest.

The volume is made up of two complementary sections: the first examines written and pictorial sources, archaeological evidence, place-names, and the history of the English language to discover what kind of crops and livestock people raised, and what tools and techniques they used in producing them. The second part assembles a series of local landscape studies to explore how these techniques were combined into working agricultural regimes in different environments. These perspectives allow the authors to take new approaches to the chronology and development of open-field farming, to the changing relationship between livestock husbandry and arable cultivation, and to the values and social relationships which under-pinned rural life. The elite are not ignored, but peasant famers are represented as agents, making decisions about the way they managed their resources and working lives.

A picture emerges of an agriculture that changed from an essentially prehistoric state in the sub-Roman period to what was, by the time of the Conquest, recognizably the beginning of a tradition that only ended in the modern period. Anglo-Saxon farming was not only sustainable, but infinitely adaptable to different soils and geology, and to a climate changing as unpredictably as it is today. 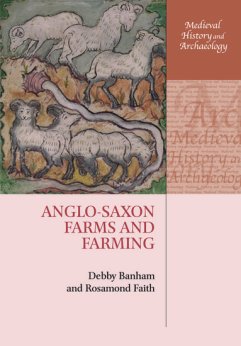 Debby Banham is a medieval historian who teaches in the Universities of Cambridge and London. During the 1970s she worked as an agricultural labourer, and when she arrived in Cambridge as a mature student, discovered that farming was the only thing she knew more about than the people who taught her. She has published Monasterialies indicia: the Old English monastic sign language, and Food and Drink in Anglo-Saxon England, as well as articles on Anglo-Saxon farming, diet and medicine, and monastic sign language.

Rosamond Faith has taught medieval history at the universities of London, Cambridge, and Oxford, and is the author of The English Peasantry and the Growth of Lordship and many articles on English and French peasants, the rural economy, and the English landscape.