Journée d’étude – Social dominance and resistance in the Middle Ages

Medieval societies were fundamentally unequal. The long-term social dominance of a restricted group of domini which exercised power over the rest of society, controlled access to resources, and extracted production surpluses was a key phenomenon during the medieval era. The domination of this aristocracy of clerics and lay lords was mainly based on land ownership, control of coercive power, means of production, and social representations elaborated into the single most influent institution in the Middle Ages, i.e. the Church. These asymmetrical power relationships will be at the heart of the conference that the Flemish Medievalist Association (Vlaamse Werkgroep Mediëvistiek) and the Network of French-speaking Belgian Medievalists (Réseau des Médiévistes belges de Langue Française) will organize in June in Brussels. Our aim is to examine the strategies developed by dominant elites in order to maintain their power, ensure their social reproduction, and legitimate their predominant position in medieval societies. On the other hand, we will investigate why a large part of the population contested, or tolerated out of necessity, its submission to a small elite of aristocrats, a question that was already raised towards the middle of the sixteenth-century by Étienne de La Boétie in his Discourse on Voluntary Servitude.

The study of acts of resistance and rebellion to elites might provide an interesting approach to social dominance. Indeed, the power of medieval domini can not be described as absolute. Often, the predominance of clerics, landlords, or patricians was contested by social groups that did not exercise power. It is therefore essential to examine the relationships between the dominant elites and the groups – sometimes living at the margins of society –challenging their authority. In this perspective, we would like to analyze the strategies and rituals of resistance these groups adopted in order to challenge the elites. Their actions encompass violent rebellion, such as the eleventh and twelfth-century urban revolts in northern France, the peasants’ revolt in England in 1381, or the urban uprisings in Flanders during the late Middle Ages, but also more subtle negotiation and communication strategies developed by late medieval peasant communities (Gadi Algazi), forms of literary subversion used by poets, such as Rutebeuf, or calls for a return to an older “golden age”. It would be interesting to determine whether these strategies of resistance challenged the structures of the social system, or whether they were only responses linked to specific political, social, or economic circumstances. Issues of gender fit very well into this topic, insofar as some medieval women displayed a creative resistance that carved out a niche for themselves in spite of male predominance. More radical were heresies as they were linked with the will of subversion of the whole society. More largely, and given the importance of cultural hegemony in establishing a social domination, we will investigate the written evidences and discourses as well as the visual elements mobilized to ensure or to challenge this hegemony. Additionally, we would like to examine how the dominant elites reacted against the groups challenging their authority. A particular attention will be paid to the way these conflicts and disputes were remembered in medieval written evidences, which were usually produced by dominant groups. 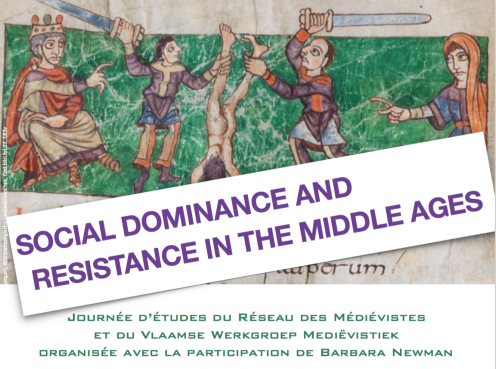