This workshop is the first in a series of three on ‘freedom of speech’ in late medieval and early modern Europe. Drawing together research from several European countries in the period 1300-1700, the series will reveal various perspectives on pre-modern free speech. Although freedom of speech, ‘the right to express beliefs and ideas without unwarranted government restriction’, was by no means a fundamental right in the late middle ages and early modern period, expressions of critical opinions towards power were always possible and often widespread. They could be uttered verbally, through the spoken or written word, but also through other sign systems and media, ranging from the sound of musical instruments to heraldic languages. 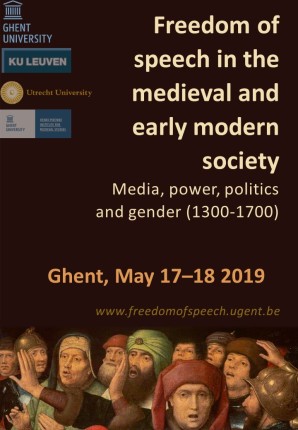 The Ghent workshop will study evidence from literary and prescriptive sources describing the ideals of free speech, and political-historical evidence of cases in which men and women wrote down and orally uttered their opinions within the context of medieval and early modern society. In Europe, urban cultures of ‘subversive speech’ existed from the late middle ages onwards. Cities offered contenders public space in which they could utter conflicting opinions in many different ways. Singers travelled through the countryside to spread news. Public poetry, songs, petitions and the like were popular media to confront ruling elites with contentious thought, but so were bells, musical instruments and visual signs. This workshop invites speakers to present their research into such media and the contents of publicly uttered speech. Case studies about the use of both written and oral, as well as visual media, and their interconnectedness, during the fourteenth until the seventeenth centuries are very welcome.

The following questions will be addressed:

Applicants are strongly encouraged to present papers in English. French papers will be accepted as well, if the powerpoint presentation is in English. Please send an abstract of 200 words to minne.deboodt@kuleuven.be or linde.nuyts@ugent.be by the 10th of January 2019. Applicants will be notified by the 10th of february.